Not creating delusions is enlightenment. - Bodhidharma

Not creating delusions is enlightenment. Bodhidharma
Read more at: https://www.brainyquote.com/quotes/keywords/delusions.html

So you're thinking about writing a book —or are writing one. Did you know that 81% of the population thinks they have an idea for a book? As I post this, the world population total has ticked past 7,487,760,700. I was going to do the math for the 81%, but my calculator didn't have enough slots for entering a billion. So here's another figure for you—as of the fall of 2016, in the U.S. there were 4,500 books a day being added to the already 15 million out there.

With so many books being written and self- or independently-published, how hard can it be to write a book?

The answer could depend on whether you are an optimist or a pessimist.

It also depends on how well the left and right halves of your brain communicate. Most of the time they are at war with each other. You see, the left brain is logic and the right brain is creativity. It's also a fact that logic will always trump creativity. So, technically, neither side can write a book without the mutual cooperation of the other.

Over the years, I've concluded that most writers believe in the mysticism of their creative selves, their Muse. That it produces the magic that is a story.

Hogwash. There is no mysticism, no muse, but there is the imagination. The imagination is part and parcel of the subconscious left brain where creativity, insight, intuition, feelings, and, most importantly, non-verbal communication dwells. In other words, the imagination doesn't talk, it delivers feelings, imagery, etc., up to the conscious, logical brain. It's up to the logical mind to translate. Logic is how we make sense of everything we perceive. And that's why Logic will always trump Creativity.

And therein is created another problem. Should creativity actually produce a completed novel, logic will point out the fallacies, the unbelievableness, and grammar and syntax errors. That means countless rewrites and revision, all of which can become so overwhelming that a writer sets the work aside and moves on to another story. After all, imagineering a story is always more fun.

But the downside soon rears its head. Logic says there are problems with the tale, with the characters, with just about everything and if that tale gets published without great editing, what reader will give it a good-read rating?

The creative self might say that if everyone's turning out novels, writing a book must be easy. Yet logic whispers that writing a good book, one readers will give five-star ratings to or ones that makes best-seller status, will not be easy at all. The truth lies in the logic—talent will take you only so far, that knowledge and practice of the art and craft of fiction writing enhances and liberates creativity. Best of all, craft can be learned, resulting in a story worth a reader's purchase and enjoyment.


So, which of your two brain halves thinks writing a novel is an illusion (considered magical by naive observers) or delusion (an erroneous belief that is held in the face of evidence to the contrary)?

The truth lies in the logic.

****Next month's topic is What's Behind the Rules?

☻I wonder how many reading this will get the pun of my closing line. A simple "got it" comment would be nice. 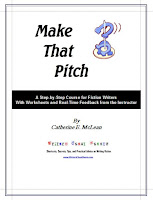 This is a 1-on-1 writing course for fiction writers who want help creating a good pitch for their book. This is not an essay or lecture or cookie-cutter formula. THIS IS A STEP-BY-STEP course with worksheets and real time feedback from the instructor. If you need a tag line (log line, elevator pitch), back cover copy-blurb, a mini-synopsis for a query letter, or the descriptive summary of your tale, go  HERE