"Passivity--A different look at what's meant by Show-Don't-Tell" will be the topic of my workshop at the May 13-15, 2011, Pennwriters Conference in Pittsburgh.  Information on the conference is available at www.Pennwriters.com

Posted by Catherine at 3:02 PM No comments:

Happy New Year to me!  I'm starting off 2011 with a light-hearted, flash fiction short story sale to "Golden Visions" -- an online quarterly for science fiction and fantasy.  "Just Desserts" will appear in the January-February-March edition, soon to be out at  www.goldenvisionsmagazine.biz

Posted by Catherine at 2:56 PM No comments:

Well, I am amazed.  Dumbfounded actually.  In my August 21 blog, I complained about having to manually remove the unwanted spammers putting links to their sites in the comments area of my blog entries.  Well, it's stopped.  And none have appeared for weeks now.  So, it looks like I won't be switching blog hosts after all.

Okay, so that nagging little voice in the back of my head is laughing and saying something equally troublesome will take it's place because spammers and hackers live to frustrate ordinary blog-citizens like me.

Catherine
Posted by Catherine at 3:16 PM No comments:

This summer I've been getting comments to my blog posts--only the sender is a series of boxes with numbers in them followed by a line of underscored periods.  These links are not something I'd ever endorse or encourage.  Actually, I'm offended by these being on my blog site.  I've tried to contact Blogger.com about filtering out this sort of thing as unwanted spam, but they have this disclaimer about freedom of speech.  Since I was unable to find any way to rectify this situation, all I can do is delete the offending commentators from my blog--or maybe I should just discontinue having this blog.  If they can't find me, they can't post.

Catherine-the-frustrated
Posted by Catherine at 10:01 PM No comments: 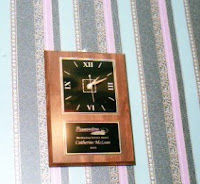 There I sat, May 15, watching the announcer making her way to the lectern in the court area of the Best Western Eden Resort in Lancaster PA.  She would soon announce the Pennwriters 2010 Meritorious Service Award winner.  My name was among the candidates nominated and there were some awesome members on that list.  I didn't have my hopes set too high, after all, this was my third year of being nominated.

Maybe the third time is the charm because there was no doubt that with the speaker's opening line of "This year's Meritorious Service Award recipient has been a member of Pennwriters since 1995. . . . "  that I realized I'd won and I was wowed--then touched when the speaker said: "As an author who knows that publication is not always a writer's goal, but that writing well is, this year's Meritorious Service Award winner, strives to help her fellow Pennwriters learn and write from the heart."

I had written those words for my first bio when I was running for my first term as Area 1 Representatives back in 2004.

Above this entry is a photo of the plaque-award.  A long time ago someone told me the clock was symbolic of all the time a volunteer has given.  The clock is now mounted on my office wall, but when I first installed it, I sat in my task chair looking up at its gleaming gold numerals and recalled the years and the volunteer minutes and hours given to Pennwriters.

In 1998, I gave my very first workshop at the local library with a minuscule turnout.  Now the workshops I give in person draw more than 40 people to fill a conference room.  In 2009, I gave my first online workshops--and more are scheduled for this year and next.

Over the years I've served Pennwriters as contest coordinator (for four years) and then was Area Rep (two terms).  At conferences, I've been a regular volunteer.  Once I stepped in two days before the conference to run the Silent Auction because the auction coordinator couldn't make it.  I sold tickets and tickets--breaking the $1,000 mark for the first time.  Okay, I will confess, I had fun coming up with ideas why people should buy lots of tickets!

I've been a room moderator, Conference Penn Pal, and an agent/editor timekeeper.  I've even sat in corners listening to members practice their pitches and missed the workshops I had wanted to attend.  Periodically, I've relieved volunteers in the hospitality room or at registration so they could have a bathroom break.

Just listing all the volunteering makes me realize how a little volunteering here and there have added up to years and hours of service until this year, I was honored with the Meritorious Service Award . . .

Wow.
Posted by Catherine at 4:26 PM No comments:

I would rather create a story than edit it.  That's likely the lament of every writer.  Creativity makes the heart sing and the blood pump joyously.  It's all about discovery and what-ifs.  Possibilities abound.

On the other hand, after the writing is done, self-editing is a must--and drudgery, the recalling of rules of punctuation and grammar, examining word combinations to avoid alliterations or finding you've created unintentional, erroneous imagery for the reader.  It's about double checking time lines and time frames, historic facts, spellings, et. al.  In other words:  self-editing is work.

Managing that "work" is a matter of trial and error until a "system" evolves that works for you--and likely only you.  After all, we don't all write in the same genre or choose the same subject matter. (Life would be very dull if we did.) So, embrace your individuality and creativity but sit down, have a conversation with yourself, and come to terms with self-editing.  And, yes, I dare to say it:  become creative in the method of how you systematically self-edit.  What you'll likely discover is that the negativity you associate with self-editing eases (as well as frustrations) and you turn out better copy in far less time.

Persevere and write on.

Posted by Catherine at 1:04 PM No comments:

I volunteer at the local library by setting up their display case.  During this month of April, the theme is Shakespeare, more specifically: "The Play's the Thing."  In researching Shakespeare on the Internet for ideas of what to include in the display, I was astonished to learn that Shakespeare wrote 38 plays, 154 sonnets, and introduced some 3,000 words into the English language.  Then I was doubly astounded to find numerous quotations are still being quoted from his works, like: neither a borrower nor a lender be, to thine own self be true, it was Greek to me, and the course of true love never did run smooth.  Centuries have come and gone, but The Bard's words endure.  I wonder if there is a statue of limitations on plagiarism . . .
Posted by Catherine at 1:33 PM No comments:

The five-week long online course for "Understanding & Using Dialogue" has ended and I am playing catch-up to clear my desk of the accumulated backlog necessitated by the hours of feedback for the students' assignments.

Then I must switch gears and get ready for the March 20 mini-workshop I'm doing for the Shenango Valley Pennwriters group in Sharon PA.  This one will be "in person" and a much simpler format.

Spending time in front of the computer when the weather was typical, awful, rural Pennsylvania winter is one thing but, now that the sun is shining (like for five days in a row!), most of the snow is melted, and the snowdrop are blooming, I would rather be someplace other than in front of my computer.

Catherine
Posted by Catherine at 9:57 AM No comments:

I have once again been nominated for the Pennwriters' Meritorious Service Award!  This makes the third year in a row that I have been nominated.  Voting by the Pennwriters membership is underway but the results won't be made known until May when the award is presented at the Pennwriters conference which is being held this year in Lancaster PA.  (Anyone interested in the conference can check out the workshops, agents, editors, and speakers at www.pennwriters.com.


Catherine
Posted by Catherine at 10:19 AM No comments:

Thanks to the winter snows, I only last weekend got to see the movie Avatar.  Cinematographically it was a good movie, story-wise it was disappointing.  Of course, knowing story like I do, I'm a harsher judge than most.  For me there were too many cliches--along with stereotyping of the characters--until I realized that it was a plot driven story, one with a stereotyped theme no less, and not a character-driven one. And plot-driven stories are never as great as character-driven ones.  In my opinion, heroes should be heroic but, in the ending climax of Avatar, the soldier-hero was rescued/saved by the romantic lead.  Or was it the romantic lead was rescued by the heroine?  Then again, just who was supposed to be the protagonist?  That's rather murky.  I will say one thing, if anyone wants to know just how powerfully determined an antagonist should be, this movie's villain showcases it--and he now ranks second on my Villain's list - just under Hannibal Lecter.
Posted by Catherine at 4:21 PM No comments:

Registration is now open for my UNDERSTANDING & USING DIALOGUE: Intensive Online Writing Course. There is a discount for early registrations going on right now.  To register go to:  http://tinyurl.com/PennwritersCourse201002.  (Registration is limited, so act quickly.)

This is an intensive workshop with assignments and for those participating both a bonus and a free Cheat Sheet are offered.  If you have a questions, contact me.

Catherine
Posted by Catherine at 12:42 PM No comments:

New Year's Eve morning came with 5" of wet snow, which changed over to rain, which then changed over--on New Year's morning--to snow. As I write this blog, big, light, puffy flakes of snow fall outside my window. The weather people predict 4" to 8" of the white stuff today--with more snow daily until Tuesday, so no one is driving to the family gathering, which got postponed because of the Christmas ice storm.

Yesterday evening, between watching weather forecasts, I cleared off my desk, cleaned out files, and filed items. As I looked at each piece of paper, I tried to convince the pack-rat in me that I did not really need to keep that piece another year, and most pieces did end up in the wastebasket.

But this is New Year's Day, the pork roast is in the crockpot stewing in a pineapple-orange brew. Pork is the meal choice for this day because it's insurance--considered lucky--and who doesn't want to insure good luck for a new year? Of course there are a lot of other "good luck" New Year's Day customs, but this one is ours.

Another new year custom involves resolutions.  Mine are the same as they have been since 1995: 1) read the comma section of my GREGG REFERENCE MANUAL (which helps me remember the "comma rules" for another year), 2) read William Zinsser's ON WRITING WELL (which reinforces that I do, sincerely, want to continue writing well), and 3) set my monthly and yearly writing goals.

Lastly, in the process of readying my office for 2010, I tackled the stack of photos (all are 35 mm photos of the flowers that had grown in my 2009 garden--I am a prize-winning amateur photographer when it comes to flowers). My goal today (and if need be, over the weekend), is to process the best photos into greeting cards for my personal use--and scan the nicest as backgrounds for my desktop.  With the dawning of both a new decade and a new year, I thought I'd share one flower from the stack, a new bloom for me this year--a Red Morning Glory (which is actually a very dark pink).

I wish those who read this blog a Happy New Year of mornings and days glorious with opportunity and promises for the best in all that you write.

Catherine
Posted by Catherine at 12:18 PM No comments: