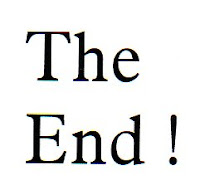 As most writers know, stories have a beginning, a middle, and an ending. Yet what few writers realize is that there are four basic types of endings, which are:

1) the protagonist wins or succeeds in solving the story problem or dilemma
**This is known as the "satisfying" ending. It's an ending most readers want. It's the type of ending that sells more books.

2) the protagonist loses or doesn't solve the story problem or dilemma
**This is known as the "unsatisfying" ending. It's an ending most readers will dislike.

3) the protagonist neither wins nor loses, and the ending is neither satisfactory or unsatisfactory but inevitable.
**With this type of story ending, the reader comes to understand that this is the only way this story could possibly end, so the reader is content.

4) the story ends in such a way (like GONE WITH THE WIND) whereby the reader can decide what the final ending might be.
**This type of story ending frustrates some and delights others.

And, in order to give a reader the most emotional enjoyment, the story must also have a climax where the protagonist will make a "do or die" decision. One that involves confronting the villainous villain, thwarting an enemy, sacrificing a long-held belief, changing a moral or core value, etc. In the climax, the protagonist not only faces the story problem (and wins, loses, or it's a draw), but  the story's ending is also the culmination of the protagonist's struggle with their own demons, which have been showcased by the plot.

So how does a writer avoid a deus ex machina ending? It's by understanding who the protagonist is down deep in the psyche, at the moral core, at the values of what that protagonist holds dear and why. Plot forces the protagonist to look at who and what they are and decide to risk or sacrifice a belief, a value, a moral, or their own life because the stakes are worth it. This is also a key to a story with a satisfying ending.

****This blog is updated the first of the month.  @2013 by Catherine E. McLean * www.CatherineEmclean.com

**** September's topic: Voice
****Want to continue to receive updates to this blog?  Then join me at Twitter -- https://twitter.com/#!/CatherineMcLea7