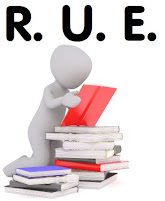 I often tell writers that there is one rule to writing, which is: Clarity trumps all rules.

Unfortunately, in an attempt to make things clear to a reader, a writer often overexplains. The result is that editors and critique partners will place RUE in a manuscript's margin (or in a comment box). RUE stands for Resist the Urge to Explain.

Prologues that open a story are notorious for being explanations of characters or settings. Here's a tip—if anything in that prologue is repeated in the story, ax the entire prologue.

Back to setting details, in particular, those in the opening chapter of a story. Novice writers often think they are setting mood or tone with such an expository chapter one opening. Trouble is, such openings have no drama or action underway, making the opening sound like a travelogue or documentary. Such openings bore readers.

Keep in mind that setting details should be sprinkled into the  ongoing action. This is best done through the sensory perceptions of a major character (protagonist or antagonist) who is actively engaged with some sort of worthwhile problem at the beginning of a story.

Yes, writing science fiction and fantasy often requires explanations of strange worlds and settings or how gadgets, technology, or weapons work. The rule of thumb is to allot no more than one to three sentences of description in any one spot (that's 20 to 60 words). In other words, use only those precise, vivid, image-provoking details of a setting, the society, etc. that can be tucked into the story's action or given in small doses by a major character. Unfortunately, putting in such details is where research complicates things.

In all honesty, resistance seems futile in the face of researched knowledge that so intrigues a writer that the writer feels they must share and teach the reader about the history, the theology, a cause, a disaster, or social mores, etc. of a story.

A story is not about everything.

A story is about

the most important elements that

support the plot and theme.

Now, let's turn to characterization and the information dumps that are back story, flashbacks, remembrances, and recalls by the protagonist (and sometimes the antagonist or second major character, who is often the romantic lead or sidekick).

Recalls are short quickies amounting to a sentence or two. Remembrances are often triggered by a sensory perception and are brief, just a paragraph or two. Flashback are lengthy scenes of many pages. A flashback will stop, or slow down, the story's forward movement and action. Such flashbacks force a reader to stop, go back in time, reorient, and forget the now of the story. Getting in and out of flashback requires skills and techniques that most new writers don't have.

Here's another thing—those lengthy information dumps, explanations, or back story details were necessary for the writer to get to know the story and characters but the reader only needs ten percent of it. Which ten percent? The ten percent that succinctly fills in the back story of why a character is who they are or justifies their particular long-held belief or moral value. Such elements are tied into the story's theme and plot and should be inserted only when it is absolutely necessary for the reader to know and understand.

In writing this post, I've had a hard time resisting the urge to explain in greater detail. Suffice to say, I've just touched on the tip of the iceberg. 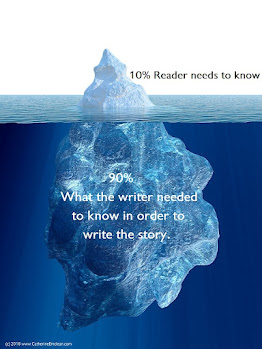