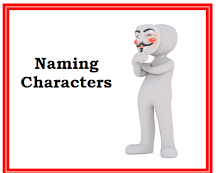 Your choice of monikers for heroes, heroines, and heavies often sets the tone for everything that follows, shaping audience perceptions of the characters before your people have a chance to hit their stride.  - Author Michael Newton

Few writers know about psycholinguistics. The definition is mind-boggling in and of itself so let me give you the simplified definition: sounds affect the way we behave and act or react in the world.

For instance, hear the hiss of a snake and our primordial conditioning that vipers can kill us has us instantly on alert and afraid — or terrified, or panicked to the point of immobility. On the other hand, if we hear a baby giggling, we have this feeling of contentment, that all is right with the world.

Such reactions to sounds happen instinctively, down on the subconscious level. But some name-sounds can also elicit a conscious reaction, like laughter at a person's named Katz Meow, or Iona Bra, which, by the way, are actual names of real people.

Another factor about sounds is reading words, i.e., seeing a name. When reading a name and in the process of looking at the letters in that name there is both a conscious and subconscious emotional reaction to those letters and the word they form.

This is especially so when listening to the pronunciation by syllables of a name. Pronunciation affects the interpretation and sorts the name into a feeling that the name-word is positive, negative, or neutral. Here's a tip, the easier it is to see and sound out the name of the story's main characters, the more enjoyable the story becomes for the reader and writer. We're not talking Dick and Jane simple. We're talking James Bond versus Mister Mxyzptlk (of Superman fame).

Here's a secret to ensure a better story— heroes need positive names, villains need negative names, and all other characters in a story who have a name fall under the neutral name classification. This is another reason why having a Master Word List or Style Sheet for a story is important (refer to August's post about word lists or look at examples here.  https://www.writerscheatsheets.com/free-writers-cheat-sheets.html

Yet, far too many writers feel they can "make up a name" for their characters. The truth is that millions of names already exist. And do consider that every person has been exposed to thousands of names from the womb to school, on the job, at leisure, and in being exposed to hours of video, TV, movies, musicians, and print media (books, magazines, and newspapers). Such names are filed deep in the subconscious along with a reference to the name, or filed with the characteristics (archetype) of a person with such a name.

Of course, there are name generators you can find online, but again, what is the psycholinguistics of such made-up names? Keep in mind that whether it's a person's name, an animal's, a place's, a thing's, a gizmo's, a weapon's, etc., all those names solicit (consciously or subconsciously) a reaction (a feeling) that will be positive, negative, or neutral.

The most enduring of people names (those passed down through the generations) have imagery and characteristic associations (tags and traits), which makes them archetype names. For instance, these are powerful archetype hero/heroine names: James, Sarah, Jacob, Adam, Michael, Jillian.

Let me stress that it's not about stereotype but archetype.

Archetype names better resonate with readers. For instance, Margaret Mitchell first thought of calling Scarlet O'Hara of Gone With the Wind Pansy O'Hara. I'll bet when you saw Pansy, you envisioned a Milquetoast personality. But Scarlet? Didn't you see the fire and flare that goes with the resonance of the noise of her name?

Mitchell wasn't the only one who changed the name of their lead characters. How about— Sherringford Holmes changed to Sherlock Holmes and Luke Starkiller to Luke Skywalker? Which means, a writer should not entirely trust the source of a name, be the source their own subconscious or their conscious effort to invent a name. Every major character's name needs to be checked before writing the draft. That's right, before writing a draft. That will save hours of edits and rewriting to change the name.

As a matter of fact, the appropriateness of all names used in a story should be analyzed — be it a machine, a street, an animal, a weapon, etc.  Ask: how does the "name" look? How is it spelled? How easy is it to sound out? Does the name come with tags and traits that make the character easily identifiable? Does the name have a positive, negative, or neutral vibe?