Sol Stein said a writer was someone who could not not write. Trouble is, a 2012 survey found 81% of people say they want to write a novel. Yet, what they don't know is that the secret to writing a good story is becoming a storyteller. A storyteller is not a writer who writes but a writer who is savvy about gaining and holding the attention of a reader so that reader is transported into a story world and remains transfixed until "the end."

How is that accomplished? Again, the secret is realizing that there is a hidden structure to a story. It's like looking at an iceberg—10% is above the water's surface, 90% below. Which means that 90% holds up the beautiful, white, ice that bobs on the top of the ocean's waves.  In other words, in a well-told story,  the reader never sees the writer at work, never sees the underpinnings that support the tale.

To become a storyteller means diving into the art and craft of fiction writing and discovering what devices and techniques need to be employed to tell a story well. Trouble is, I've calculated there are 144 aspects to writing a novel. It's also a fact that those aspects cannot be learned overnight. However, the number one element of craft that has to be mastered first is Point of View (POV) and Viewpoint.  Although the "experts" will use the terms POV and Viewpoint synonymously, they are two separate elements. Here is my succinct and simple definitions:

VIEWPOINT is how accurately the story's narrator observes the situation at hand and how they characteristically filter information and sensory perceptions, either consciously or unconsciously as they comment. In other words, the character/narrator's viewpoint is opinionated. That viewpoint may be subjective or objective, or it may fluctuate between the two extremes. It makes them open-minded or closed-minded, ethical or unethical, a coward or a hero. Then add to that all their biases and personal prejudices gathered over a lifetime. Those aspects color and taint their observations about people and that also affects how they deal with the situations they're in. 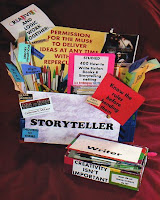 So, stop thinking about POV-Viewpoint as first person, second person, or third person. Start thinking in terms of whose voice does the reader hear narrating the story. That voice is the key to good
storytelling.

THE SAMPLER IS UPDATED THE FIRST OF EACH MONTH WITH A NEW TOPIC. @2013 by Catherine E. McLean * www.CatherineEmclean.com

MAY 2013's topic - So you're writing your first novel? The Prologue Pitfall