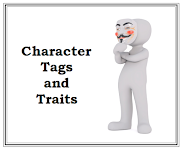 Last month's blog was about psycholinguistics — how names resonate as positive, negative, or neutral and how that benefits a story.

As you learned last month, imagery is tightly tied to the look and sound of a name. Writers should strive for an archetype name for their major story characters because, on a subconscious level, the archetype name triggers deep-seated recognition of tags and traits that go with that particular name.

They are defined as—

TAGS are a descriptive detail, a label, repeated almost every time a character enters the story and which serves to identify and characterize him or her. Tags are concrete actions of cracking knuckles, drumming fingers on a table, biting nails, tapping a toe, etc.  Tags are "externals"— they are what can be witnessed, seen, heard, etc. Tags are concrete, specific, and credible (believable).

Now, a character's name is the most important TAG of all because it is THE TAG OF IDENTIFICATION.

However, some tags label traits.  Such tags are physical clues to traits.

TRAITS are a character's characteristic habits, patterns of behavior, and mannerisms. The dominant impression is the trait that stands out the most and which should be shown to the reader from the get-go. Traits include: Is the character an optimist or pessimist? How does the character instinctively react when angry, happy, sad, etc.?

Traits are "internals" and abstracts— they involve the mind-set and personality of a character.  But here's a tip: Traits come in pairs: one is admirable and one is despicable (thus they are opposites, which helps balance out the character). For instance, at their best a character can be down-to-earth pragmatic but at their worst they can be very self-centered.

Traits come in the form of:

● a verbal tic (they repeat a common phrase, which peppers their dialogue passages. For instance, in the TV series, Detective Columbo often says,  Just one more thing.

● a particular way of speaking, like with an accent or dialect. For example Yoda of Star Wars' If no mistake have you made, yet losing you are . . . a different game you should play.

● a physical mannerism or a repeating behavior (they smoke when nervous or chew on a toothpick, they bite their nails when anxious, they crack their knuckles, or they may even fiddle with something (a lock of hair, a token, a coin, etc.)

● a way of carrying themselves, which can be their brisk stride, keeping a ram-rod straight spine, a mutinous set to their jaw, the meek hunching their shoulders, and so on.

● a scent (their cologne, perfume, bath soap, or after shave, even their body odor from uncleanliness, fear, sweating, etc.)

Even if you love your protagonist and hate the antagonist, keep in mind that nobody is 100% good or 100% evil. It is the balance, or out-of-balance, personality traits that make a character "human," realistic, and believable to the reader.

If you need help with traits, google "Images of Character Traits." Or check out the book, A WRITER'S GUIDE TO CHARACTER TRAITS by Linda N. Edelstein, PH.D.

One way to get to know a character is to journal in the voice of the character:

∙ to learn how they talk, speak, think

∙ to get a look into their philosophies on life and death, right and wrong, and what's their moral compass

∙ to learn about their education, job or sports experiences, etc.

∙ to learn about their social-economic upbringing and heritage

However, journaling is time consuming. Journaling also requires going back through what was written to locate tags and traits and sort them into which seem to dominate (likely three will for the story). And, of course, in the end, only 10% of what was in the journal is needed for the actual story.

A quicker way to get to know a character is to use a "cheat sheet" called a Character Worksheet or a Character Questionnaire, which may include lists of tags and traits that the writer has collected over time or from various sources. In other words, as the writer goes down the lists they've developed, the subconscious will likely trigger a "ta-dah" or other positive response. Then the writer can look at the traits and tags and which fit will dominate.

Do remember that the only characters who warrant such journaling or character questionnaires are the story's major characters—Protagonist, Antagonist, and possibly the Second Major Character.

Which brings me to—

Next month we'll look at Character Worksheets and Questionnaires. 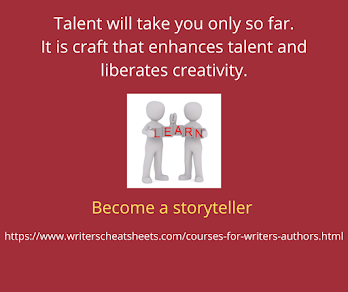