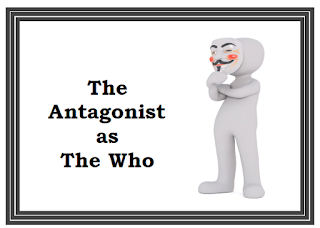 
The definition of antagonist is "someone who offers opposition."

Please note that when writing fiction, the antagonist is an umbrella term because the word covers the WHO or the WHAT that will actively thwart the story's Protagonist. Since an Antagonist can be either a WHO or a WHAT, this month we'll focus on The Who as Antagonist.

So, if the Antagonist is The Who, that Antagonist can be one of these types—

– Complicating Characters (two or more) who are not vile per se


The Who is often blatantly obvious— a stereotypically nasty, vile villain who is the staple of many a tale. However, a truly vile villain-antagonist's job is to do one or more of the following—

— thwart (baffle, ruin, disillusion, etc.)
— oppose (contradict, debate, protest, refute, repudiate, etc.)
— actively work against (fight, battle, defend against, etc.)
— throw doubt on or create doubt within the Protagonist that said Protagonist cannot defeat the villain (and the Protagonist is certain the antagonist will win or obtain the story goal).

Keep in mind that such villain-antagonists will be—

Such villains will exhibit certain traits, certain psychological or emotional aspects. Not every aspect will apply, but there likely will be three that dominate, like—

• being clever
• being resourceful
• lacking empathy
• having a need for excessive admiration
• envying others (or believe others are envious of them)
• being psychologically wounded in some way
• being capable of enormous self-deceit
• being conceited (narcissistic)
• exploiting others
• having huge egos with a grandiose sense of self-importance
• being preoccupied with the fantasy of having or gaining unlimited success, power, money, brilliance, beauty, or obtaining the ideal love
• exhibiting haughty attitudes and behavior

• are arrogant (or demonstrate arrogance) often believing they are special or unique, and because they are above others, they believe they should associate with other high-status people or institutions

• have a sense of entitlement

• blame others (i.e., they don't take responsibility for their own failures)

Here's a secret— a villain is sired by frustration. (So ask: what exactly frustrates this villain?)

Can a villain kill for all three reasons? Yes, but— for a good story, only one reason will dominate because of the motivation and what's at stake in the way of the story goal.

Even if such a vile villain-antagonist appears to be evil, there will be a shred of good in them. Sometimes that shred of good is minuscule, but it's what makes the difference between a flat, cardboard, two-dimensional villain and one that come across for the reader as "a real person" capable of dastardly deeds.

Please note that such Antagonists may not be working together or have similar goals, but their job in the story is to oppose, frustrate, and complicate the Protagonist's life.

Thus Complicating Characters add drama and suspense to a tale. Can you have a vile-villain and complicating characters in a story? It all depends on the story being told and remember—a story can only support so many characters. Keeping things simple offers more drama and equals far more reader enjoyment.

As to the One Agent?

That agent represents The Organization and acts on behalf of that organization to achieve the organization's goals. Unless, of course, the One Agent happens to be the head of the organization, in which case, he or she falls into one of the other types of Antagonists.

Lastly, for a literary-written, Discovery-type Story, the Antagonist is often of the Complicating Characters variety. They make, or force, the Protagonist to face the story's main issue which forces the Protagonist to look deep inside himself or herself to decide to change beliefs, attitudes, or a life situation—or perhaps decide not to change.

Regardless of the type of The Who that is an Antagonist, that human being or intelligent life form-entity, you-the-writer need to know that particular Antagonist's goals, desires, and motivations.

And, when you look at the "flaws" for the Antagonist, you'll find their fatal flaw, the one that undermines them time and time again and which will come into play to defeat them in the story's climax.

Above all, a story's Antagonist deserves a worthy opponent, a worthy Protagonist, so is your Antagonist smart enough, powerful enough, devious enough, complicated enough, to duke it out with your Protagonist?

Next Month — June  - The Antagonist - THE WHAT 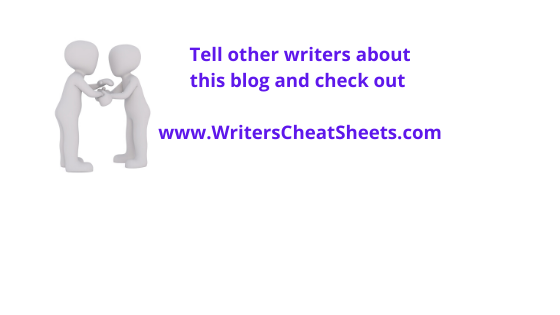