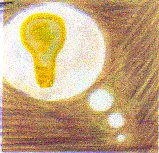 When I was a fledgling writer, I attended a workshop at a Barnes & Nobles store where a multi-published author was speaking. From the audience came the question: "Where do you get your story ideas?" The author replied: "If you have to ask that question, you aren't a writer."
That blunt reply not only silenced the audience but stunned me. Many times in the following years, I heard the question and the answer, albeit rephrased in various ways. Since I never had a problem with coming up with story ideas, it baffled me why so many people asked the question. It was also obvious to me that real writers, published writers, didn't have that problem.
However, one day when I heard that question again, I had one of those "ah-ha" moments. I realized that the person asking that question–and all the others before her—had lost contact with their writing subconscious, their muse. That usually happens because life, earning a living and paying the bills, family obligations, and a slew of other things can take priority. Thus personal creativity is shoved aside. Now time allowed the opportunity to be creative, to write creatively, but the muse, having been shunned into silence and relegated to a deep dark closet, isn't cooperating.
I also realized there was a solution. To become creative, or become more creative, means turning on the light of actively seeking "story sparkers"–that is, seeking and recognizing anything that piques curiosity or has a person saying "what if?"
One caution—ideas can be found only if the conscious and subconscious minds are encouraged to view and actively look at material, or one's environment, with the thought of "could this lead to a story?" So what type of material is a candidate for such scrutiny and thoughts? Just about anything and everything from the daily newspaper to music credits.
Keep in mind that it's not usually the front page news that will wake curiosity. Often ideas come from the tiny article in the lower section of an inside page, one with a minimalist headline,  something like "Sheriff arrested."
Just by reading those words, "Sheriff arrested," weren't you curious about why the sheriff was arrested? Which means, if you want to be a creative writer or storyteller, you need to recognize when something arouses your curiosity. Then you can either use the facts or extrapolate something from those facts that will become a story. And, guess what, as a bonus you'll be writing about "what you know" (that's because it exits, it's real).
Names, too, can trigger curiosity, for instance, Dunwoody Allen. Who names a person Dunwoody? Well, that first name is a combination of the real names of Dunn and Woody. Allen is a real surname. That's right, no need to make up a name when one can be found while reading.
For me, Dunwoody Allen had such a resonance and spark to it that I filed the name in my Bits & Pieces file (my cache of idea sparkers). Periodically, I go through the entries. Since it's a four inch ring-binder, stuffed full of pages of notes, I won't likely get to all of them in six lifetimes. However, once written, once entered into such a binder, the subconscious can happily work on piecing together a great tale.
So, if you're struggling to become more creative, or to write more realism into your stories, isn't it time to stop wondering where other people get their story ideas? Isn't it time you took a closer look at the world around you? Isn't it time to become aware of the beauty and incongruity of everyday life and nature?
Isn't it time you collected your own "story sparker" of things that make you stop and pause and ponder?


THIS "Writer's Cheat Sheet" BLOG IS UPDATED THE FIRST OF EACH MONTH WITH A NEW TOPIC.  @2013 by Catherine E. McLean * www.CatherineEmclean.com
Coming August 2013 - A Story's Ending