2020 - July - The Antagonist's Entourage and Henchpersons 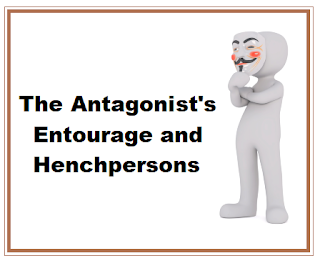 Although serving a certain dramatic purpose,
secondary characters have to rise above their roles
to avoid cliche. — David Corbett The Art of Character


Antagonists tend to be loners. However, now and then, or by their desire, they have others help them achieve their goals.

As you learned in this blog's March post, the Protagonist has an entourage. Well, an Antagonist could also have followers, like—

* Friends — be they a man or a woman, that friendship isn't a binding one because as soon as the friend's usefulness ends, or their inability to be manipulated by the Antagonist ends, that character becomes expendable. It's also inevitable or likely that such a friend may die at the hands of the Protagonist. But if the Antagonist's goal warrants, the Antagonist won't have qualms about sacrificing their friend, cohort, or Head Henchperson or any lesser henchpersons.

* Toadies, Monster-beings, Servants, Minions, etc. — these characters come across as unquestionably loyal. They endeavor to please and appease the Antagonist. Often they fail and incur the Antagonist's wrath, which leads to punishment and suffering, if not their violent death. Some Antagonist have volatile tempers and violent reactions to mistakes.

* A Mentor — often in their youth, an Antagonist will learn from a master or a mentor. However, at some point, the Antagonist concludes they are superior to or more powerful than the Mentor. The result is a termination of the relationship. Often a Mentor has a showdown with their Antagonist student and loses. That loss might severely cripple the Mentor or rob them of their magical or superior powers, or kill them. If the Mentor survives, they are so weakened they usually pose no worthwhile threat to the Antagonist.

* Family (parents, siblings, other relatives) — Depending on how functional or dysfunctional the family is, family members may help or hinder the Antagonist achieving his or her goals.

* Professionals (gangsters, crooks, thieves, killers for hire, security enforcers, and others procure things, obey orders, and carry out the Antagonist's plans and orders, and protect the Antagonist. Often these professionals are paid (money, items of value like gemstones, etc.) for their loyalty and service. Trouble is, true loyalty cannot be bought, so how can the Antagonist truly trust them?

Although most of the Antagonist's entourage fall into the category of Minor Named Characters or are Prop People, neither group gets a POV-Viewpoint.

Bottom line— the reader wants to see the Antagonist face off with the Protagonist in the climax so it's best to put emphasis on the quality and character of the Antagonist. However, in novels or in the longest of short stories, that Antagonist may need someone to talk to or to order about or they may need an ally or a henchperson.

In a writer's group ages ago, I commented on a story where the antagonist killed three henchpersons once they'd given him the help he needed. When I referred to them as "disposable helpers," the writers chuckled. Henchpersons. Got it.

Yes, henchpeople seem to be disposable helpers. LOL Henchperson is that catch-all phrase that includes both henchmen and henchwomen (thus being more politically correct). :) It's also interesting that in medieval British society, a henchman was a page or squire. Thanks for your comment and have a wonderful 4th of July holiday.