Being a writer, I bet you've experienced ups and downs, the surges and lulls of the struggle to get a story onto a page. So often a writer blasts off like a rocket ship with an idea and then the engine quits. The idea plummets to earth, the reality-check that what seemed so grand has exploded into nothing worthwhile. The pattern may look like this: 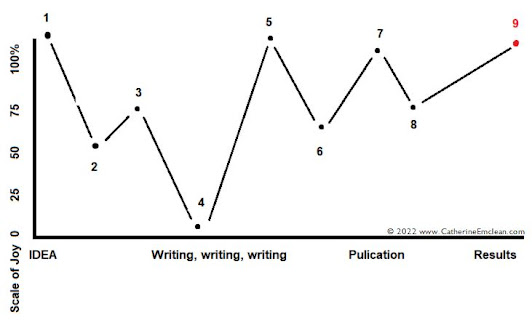 1. This is the "ah-ha moment," the manic high, the stupendous exuberance of the idea's arrival. The thrill of "what if" that sets a writer off to scribble down the bones or a scene of the idea. But this "ah-ah moment" of conception can also be a character coming forward and intriguing the writer into telling their story. Such an idea is the most beautiful of wild roses, but—

2. The rose has thorns. The first thorn-prick is a reality check—  there are problems with the idea, the character, the plot. And so the joy fades.

3. But the rose's scent lingers. That idea has the writer pausing, reflecting, and thinking that the idea isn't as bad as first feared. Hope renews with possible fixes, new information, and so on.

4. However, the fix nets another jab of a thorn—more problems, seemingly unsolvable. Then come questions without answers. The writer feels stuck in a depressing quagmire.

5. But the recalled, heady, first-scent of the rose, the idea itself, beckons anew, whispering of a promise that must be written. The stick-to-it-ness of being a writer kicks in, and a renewed sense of can do, must do, nets a draft to be shared and feedback sought.

6. With that feedback, the red-pen notations, the scowls and blank faces of readers, additional thorns sink deep and draws blood that the work is doomed. The pessimist within the writer whispers "you can't write this."

7. And yet, the realization dawns— the work needs a few Band Aids. A tweak here. A restating there. Another realization—the work is good enough, not perfect but worth shipping out to beta readers and keeping one's fingers crossed.

8. The beta readers seem to take forever to return their feedback. It's good feedback. Now the book goes out to a professional editor or agent.

9. If all has gone well, the book becomes a bouquet of roses, published, earning five-star reviews, being talked about, entertaining the populous, or affecting their lives.

Writing often seems like a topsy-turvy endeavor. One that takes perseverance.

So, where on the graph are you now with your current WIP (Work In Progress)?

Posted by Catherine at 9:19 AM

I like your idea of the writing process as a rose with thorns better than an instructor's idea of digging below an outhouse to find the nugget of gold.

I'd forgotten about that outhouse and gold nugget, LOL.